I have previously commented on ADS a couple times (here and here), so I’m not going to go into detail on what the business is and does.  I’ll just point out that what seems obvious: Mr. Market enthusiastically believes the future of ADS will be different than the past. Today, the business trades at around $147/share vs. $297/share on November 6, 2015 – and today, there are fewer shares outstanding and earnings are higher.  The go-forward expectation of ADS is sour.

A few weeks ago, ADS announced the sale of Epsilon for a disappointing price and the market is still puking the stock.  From the sale, ADS will net about $3.5 billion or roughly $500-$800 million less than what I was expecting.  The announcement was just the latest in a long string of disappointing surprises that our CEO, Ed Heffernan, has delivered over the past few years.  Ed has proven inept at predicting the results of the business he captains, and he, like all businesses, needs to smother guidance.

With all this excitement going on, it takes some emotional fortitude to not join Mr. Market in the puking of stock.  So, before we wave the white flag, let’s look at the numbers.

Today, ADS has $5.7 billion of debt (corporate level – excluding capital in the card business).  They also have $3.7 billion of cash.  With the soon-to-be $3.5 billion in proceeds from the Epsilon transaction, they will retire $2.4 billion of debt and buy-in $1.1 billion of shares which is about 13.5% of shares outstanding (~7.3 million shares at today’s price).  So in the transaction, they’ll cut their interest expense by about $110 million per year, save $70 million per year in run-rate expenses, and end up with 46.3 million shares outstanding and a net neutral cash/debt position.

ADS uses non-GAAP like it’s going out of style and so it takes a bit to tease out their real earning power.  I can appreciate that GAAP doesn’t fully account for the true economic income of this business, but the management team goes too far (by excluding all depreciation, share-based compensation, restructuring charges, etc.).  If I owned the business, I would be able to take from the business an economic income of about $750 – $800 million in the coming year.  After the repurchase and interest savings from debt paydown, that comes to about $17/share.  And as mentioned above, ADS thinks their run-rate expenses will be about $70 million lower without Epsilon.  That pushes earnings per share to about $18.  ADS’ management team would almost surely think my earnings number far too low.  They report results in EBITDA (which means nothing to a common equity holder) and measure their income in “Core EPS“.  So using their Core EPS number, earnings will likely be a tad over $1 billion for the year.  Either way, it probably doesn’t matter too much which numbers are used at today’s share price.  I believe ADS is trading at 8x earnings, and they’d probably say 6.7x earnings.  The last time ADS saw these multiples applied to their profit stream was in the spring of 2009.   On the surface, the multiple of annual earnings required to purchase this business is glaringly low.  Or is it?

From 2006 through today, the average PE of Alliance Data has been a bit over 15x.  Throughout those years, the earnings growth rate was just a tad over 15% per year; a very strong track record.  Even over the most recent three years (2015 – 2018), earnings grew at that same rate, though the PE multiple retracted.  And here is where, I believe, ValueAct, Arlington Value, Brave Warrior, and myself got lured in.  The business is still humming along, scares of a changing retail landscape probably won’t kill them and the stock will re-rate to some historical higher multiple if these scares prove overblown.

But ADS is different now.  They’re becoming a pure(r) play credit card business.  Over the historical years mentioned, ADS was pitched and viewed as (at least partially) a technology company.  Their Conversant and Epsilon brands, which have now been sold, were a large part of their overall business and are less burdened by regulatory constraints while requiring far less capital to grow.  Not to mention that while ADS stewarded those assets, they grew very nicely which almost surely helped ADS’ entire multiple.  The growth rates in those businesses started to slow in the past few years and the entire business got priced more cheaply (probably not a coincidence).  Then ADS sold them.  So should the multiple of earnings investors pay for this business mirror or kinda mirror the historical multiple?  Probably not.

So where should it trade?

Capital One (COF) over the 2006 – today time period traded at an average valuation of 11x earnings – similar multiple over the past few years.  It’s earnings per share only grew by 3% per year.

Discover (DFS) over the same time period has traded at almost the exact same multiple as Capital One: 11x.  It has grown its earnings per share by roughly 10% per year during that time period.

Synchrony (SYF), growing its earnings by about 6% per year and being best comparable business, has only been public since 2014 though has been awarded an average multiple of 11.9x.

ADS has been growing at roughly twice the rate of their competitors (“peer group”) with returns on equity consistently 30-50% higher than the peer group.  Again, on the surface, those numbers seem deserving of a higher multiple than their peers.  But maybe their business is riskier or their clients more apt to be disrupted the Amazonification of everything.  So perhaps they only deserve an 11x multiple, roughly mirroring their peers.  I think their card and loyalty business will yield $800 million in real earnings this year, and after their announced buyback there will be 46 million shares outstanding or earnings of $17.40 per share.  At an 11x multiple, that’s roughly $191/share or a 32% upside from today’s $145 share price.

A Note on Losses

During the great recession, loss rates moved from 6% in a benign market to 9ish% in the depths of the recession, and then down toward 4.5% as the pipes were cleaned out of filth(y borrowers), and have since trended back up to 6%.  ADS remained profitable through the rollercoaster and simultaneously bought back 1/3rd of the business.  If an investor has a reasonable time-frame, I don’t know why I should assume loss rates should do anything different over the next decade.  Further, I don’t really believe their customers are riskier.  The risk of lousier credit is mostly mitigated by the very small credit lines ($500 or so) and the fact that ADS needs 5-10 of their customers to dine-and-dash for every one bank card customer at the likes of Discover or Capital One.  Loss rates through the 2008-2011 period sort of proved this point as traditional card issuers saw losses balloon to around 9 or 10% from 3 or 4% prior to the recession.  ADS actually fared better.

ADS is doing well on question 1.  The card business is still growing double digits and new client signings remain strong.  ADS appears to understand that as malls lose anchor tenants gradually, then other tenants suddenly, a large swath of vintage customers could see a lot of pain surface quickly.  Their answer is to spool up internet and “new retail” (Ulta, Burlington, Ikea, Sephora) customers as quickly as possible.   Questions 2 and 3 are much harder to see and track, and the uncertainty embedded in those questions seems to be reflected in the price.

In the future, ADS will probably sell their loyalty businesses and the card business will be what matters.  My opinion has been that as retail evolves, loyalty, incremental sales from existing customers, and targeted marketing will still matter.  It’s just a question of what formats those take and whether ADS will evolve to meet the anxieties of all types of retailers.  Credit cards have proven very hard to kill in the USA.  Will private label cards prove as wonderfully difficult?  I obviously don’t know, but the fact that they are used as heavily as they are in 2019 gives me confidence.

This is very rough stuff, and really just to help us get our bearings beyond the PE multiple I covered above.  I also do believe a DCF is appropriate to value the business and really cannot understand those who believe all financial-based businesses have to trade at some low multiple of book value.  Included in the DCF is the share count reduction of 7.3 million shares according to the company’s plans and an additional 3 million shares throughout the remainder of the decade (which is quite conservative considering the company’s repurchase history).

In short, I don’t think we need any type of historical (double-digit growth) performance to avoid losing money from today’s price level: 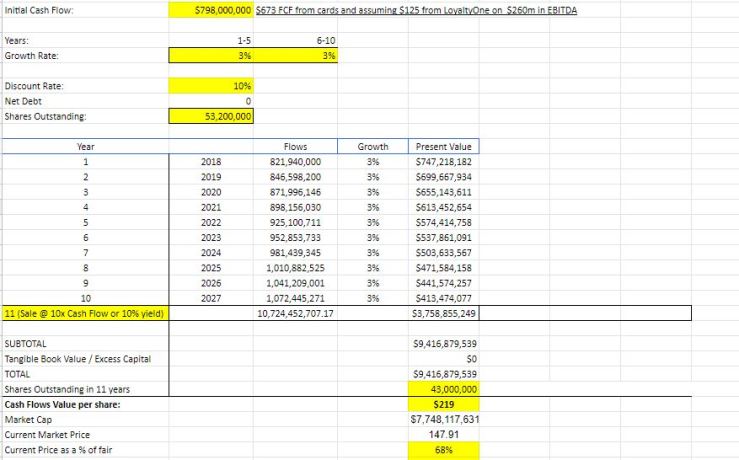 Obviously, growth will look a lot less smooth than the above example.  So just for kicks, let’s go one step further and assume a recession is coming.  In the last one (comprising 2008 and 2009) earnings within cards fell by 27% and 28% as credit losses rose, then earnings rebounded in 2010 by over 60% as credit losses began to retract.  Loyalty grew through the recession.  For simplicity, let’s assume the entire business’ earnings fall by the same rates they did in the great recession AND that the ensuing recovery is less than half of what it was in 2010.  Further, we’ll assign slow growth after and leave our sale price at a 10x multiple:

I think I was wrong that the stock was worth purchasing at $200. I overpaid.  I almost surely got sucked in due to the ValueAct, Arlington, and Brave Warrior involvement.  I too believed a multiple of 13-15x appropriate.  I think it’s clear that multiple is too optimistic UNLESS Alliance Data proves it can keep ROE’s over 30% and consistently deliver at least high single-digit growth from the “new” and “online” retailers – all while not having their vintage customer base erode faster than they can replace it.  That’s a lot of proving to do and will take at least a few years to do so.

**As always, this isn’t investment advice.  Just musings.  My numbers might be wrong, and the models almost certainly are, etc.  Do your own research and don’t rely on third-party sources to make investment decisions.

View all posts by benevelousaddertongue

3 thoughts on “Alliance Data was a Value Trap. Maybe.”